Frozen outside? Avoid stepping on beds to keep soil healthy

We offer a range of subjects from edible gardening to maintenance know-how to gardening for pollinators & non-stop garden interest.

Get in touch today to find out more & book us for your forthcoming event!

Dehydrators – A Must Have for Gardeners of Edibles 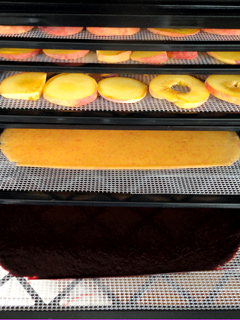 For those of you buried in snow & ice, I apologize for my next words. Seattle looks and feels like spring. Days like today — when the sun is shining, snow drops and hellebores are showing off their down-facing blossoms, hummingbirds are chirping with glee around fragrant Hamamelis, and honeybees are buzzing from fragrant Sarcococca to pollen-filled Heath — get me in the mood to garden. And with all the edibles I grow comes the challenge of putting by some of the harvest to get us through winter.

Last week, when I was sick & wanted some Feel Better Soup, I was so thankful I had taken my food preservation guru friend Theresa Loe’s advice last spring to blanch and freeze some of my abundant snowpea harvest. Having those at hand meant I could make a version of my favorite sick-day soup without making a trip to the grocery store. And that got me thinking about all the other goodies I’d put up for winter — including dried fruits and veggies!

(Qualifying purchases made through affiliate &/or sponsored links on this page and others on this site pay a small percentage to Garden Mentors.) First off, I’ll be clear, I’m not much of a canner. I have made any number of jams, preserves and even spicy pickled beans, but don’t ask me about making kraut and canned tomatoes. (Check out Theresa’s Growing a Greener World TV episodes for that kind of info.) As for me, I preserve most of my fruits & veggies through freezing and dehydrating. Freezing may not be the most sustainable way to go, but it’s what I know and feel I can manage. Dehydrating is very sustainable and offers some pretty fantastic options in preserving food. Read on for more details on tools and ideas for drying your own harvest in the year ahead! 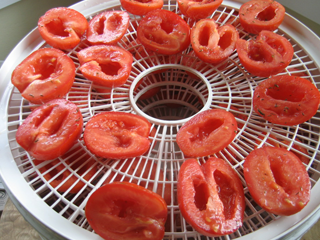 Tomatoes Prepped to Dry in a Nesco Dehydrator

In Seattle, it isn’t likely that you’ll have success trying to dry your tomatoes in the sun — unless you create a solar oven, which I may try in the coming year. In lieu of sufficient hot, baking outdoor summer sun, I turn instead to an electric, indoor dehydrator to put my foods by. Using a dehydrator, I’ve dried peaches, tomatoes, apples, peppers, herbs, and I’ve even made fruit leathers. Some dehydrators get a big thumbs up from me. Others, well, let’s just say they’re not quite up to the job of running 24 hours a day for several months of the year without, um, giving up the ghost and adding a pile of plastic to the landfill.

My first dehydrator was a round, stackable Nesco Snackmaster similar to this one. I liked that I was able to buy it at a local store relatively cheaply (for around $45), and I liked that additional trays could be added as needed. It was easy to clean, and it did dry foods consistently, evenly and in a relatively short period of time. It was fairly loud, did not have a heat setting, and the trays were a little wobbly to put together. Because of the stack-system design, it really seemed to only allow for drying materials on trays. It survived my first season of drying, but not even half way into the second year, the motor quit. I got through the rest of that harvest season by borrowing my neighbor’s Nesco, praying I wouldn’t kill his. I didn’t, but I swore I’d buy a better one going into to 2010. 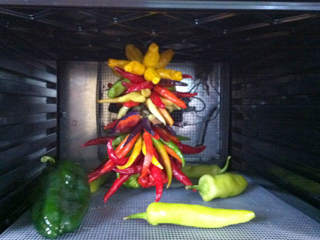 My second, and current dehydrator is a 9-tray Excalibur. After doing quite a bit of research on options, this looked like the best option for someone who does a lot of dehydrating. Priced around $220, it was a bit more spendy than my Nesco, but the additional features and longer warranty made it look worth a try. I opted not to buy a version with a timer, which would be great for someone who isn’t home much. Otherwise, this dehydrator offered removable trays with liners, which are easy to clean. Too, it comes with multiple heat settings, which gives a lot of control. If you prefer to create living foods, there’s a setting for that. If you want to get your yeasted bread to rise, there’s a setting for that & you can remove all the trays and set a bowl inside the machine. If, like me, you buy (or create) a beautiful pepper braid, you can hang it in the Excalibur to dry rapidly (and avoid having it rot out). The Excalibur also comes with quite the cookbook, explaining ways to make everything from fruit leathers to jerky. I have yet to try the later, but I made both peach and blueberry leathers, which have been great summery treats this winter. I’ve only had Excalibur for one harvest season, so to be fair, I’m not entirely sure how well the motor will hold out going forward. Oh, and heads up, this puppy is loud too. When I finally shut it down for the season, I think the whole house breathed a big sigh of relief to hear the sound of silence again.

If you’re new to vegetable gardening and dehydrating, shop around before you make a purchase. Consider what you want to put by and how much you plan to put by. Also, think about space. Excalibur, even the ones with less trays, have a fairly large footprint while smaller ones like the Nesco take up much less room in the kitchen.

It may be early February, but it’s never to early to start thinking about your edible gardens. We’re still loving all of our dried tomatoes from last year — enjoying them in tomato sauces, stews and antipastas — but soon enough, in just a few weeks, I’ll be seeding more to ensure we have plenty to get us through the winter ahead. And, maybe I’ll go take another look at solar oven plans. That might be a fun DIY project for this season, too!