Our 2020 FREE flora & fauna walks are cancelled until further notice:

Because of Covid-19, we are suspending all guided walks until further notice.

We do invite you to join us in the natural world & garden daily at 2pm PDT on Instagram live. We alternate between gardening lessons & nature walk lessons. For free.

Nettles have a bad reputation for their nasty sting, but edible wild nettles deserve our praise. And, they’re a great reminder that what may be called an invasive weed by one is a beneficial food source to others. (Think about that as your lawn fills with edible dandelions this spring, too!) 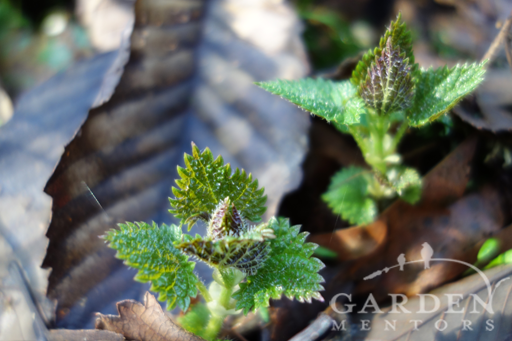 Wild Nettles Emerging from the Soil in Late Winter

One of the earliest perennials to emerge after the dormant season, Nettles offer our diets respite from winter’s less available fresh, local greens. They’re packed with iron and vitamin C and much more. These greens emerge from the ground in February, growing particularly well in dense woodland understory where sunlight may be minimal. And, they continue to grow and feed us abundantly into early summer when their stems toughen as they begin to flower.

To harvest Nettles, take care to handle the harvest gently. Wearing gloves is probably a good idea.  The underside of their leaves are armed with tiny stinging spines. One nick from these little needles can give you an uncomfortable stinging itchy rash. Fortunately, for many, the sting wears off within a couple of hours.

Ideally, harvest nettles a couple of weeks after they have emerged from the soil. At this point, they should have several pairs of leaves on a stem less than a couple of feet tall. Make your cut just above a pair of leaves, and the remaining plant should regenerate more growth to harvest later in the season.

Rather than risk a sting to your digestive system, cook nettles instead of eating them raw. A brief steaming or blanching will knock back the prickly spines. Chop them up (after cooking when the stingers are tamed) and toss them with a bit of vinegar for a great wild side dish not terribly dissimilar to spinach or collards. Save the cooking water, and use it in a smoothie or soup stock.