White & other light colors add brightness to the garden – especially at night! 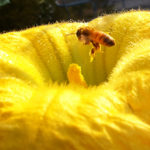 “I have a slope behind my West Seattle house covered with large, old sword ferns. The ferns are all flattened and sad-looking, I am assuming because of the severe snowfall this winter. Do you have any advice? I going out to look for new fronds. If they don’t exist, is the plant dying? Thank-you, a fern lover “

J,  thanks for your question. I, too, adore ferns. I know many who disparage the sword fern as common, but I admire it for many reasons including:

But, this time of year, particularly after rough winters like we had, it can be tough to know if our poor sword ferns made it through. My regular regime with my many sword fern is to go out in the garden in late winter/early spring and remove all of the existing foliage from them. Yep, I cut it all off, leaving just the tight brown fists of yet-to-unfurl fronds at the base of the plant.

I make these cuts in early spring so I can enjoy the evergreen fronds all winter. Also, the overwintering fronds help protect the tight “fists” of new fiddleheads from winter weather. These will emerge by mid-to-late-April (in the greater Seattle area). Too, but cutting everything off of the plants each year, I never end up with an ugly mixture of dead, partially dead and lovely new fronds mixed into each plant. And, cutting them before the fists open and the fiddleheads emerge mean I’m much less likely to damage the new, tender fronds as they unfurl. I usually spread the cuttings around the fiddlehead fists to add an extra protective layer of  green mulch in case of cold temps and to keep weeds down. When they turn brown as temperatures increase, I remove them to the compost pile.

So, are your sword ferns dead? I doubt it…or at least I doubt all of them are dead. Most sword ferns I’ve seen this year survived just fine. They’re a little late to unfurl, but do you blame them in this wintery spring weather?

As you’re exploring your plants, cut the old fronds away. If you have brown fists held tightly and firmly in the ground, you should see new ferns unfurl soon. Heck, as you’re cutting back the older growth, I bet you even find a few fists loosening up now.

Thanks again for writing in!