Are tree branches scraping the side of your house? Prune them or call an arborist now for help.

How to Remove Ivy Weeds

Many ask how can I remove ivy from my garden? 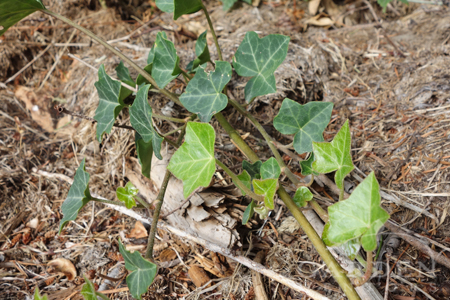 English ivy may seem like a great ground cover choice,
but there are better options than this invasive weed.

Depending on how much English ivy (Hedera helix) you have, where it is growing and how long it has been growing there, eradicating English ivy can be quick work or may take several seasons.

There are many species of ivy growing, but the most insidious is common English ivy, which was likely introduced to “new world” gardens by the English who had cultivated this European mainland plant in their island gardens. Then, it spread quickly across the land. This adaptable plant will thrive in sun or shade and the cruddiest soils. It can travel as a ground cover and create a climbing helix shaped woody vine, smothering everything it crosses — from the side of a house to a tender perennial garden to ancient forests. That bullying behavior qualifies it as a nasty weed in my book. 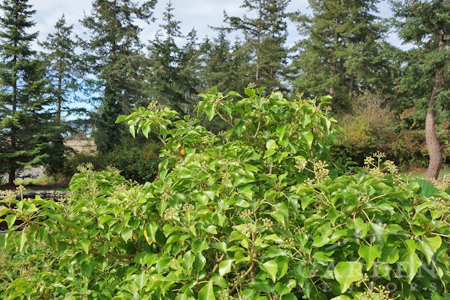 In the foreground, mature ivy growing on the stump of a mature tree it helped kill. In the distance, large native Doug firs clothed in climbing ivy to remove.

And I’m not alone in thinking this plant deserves to be called a weed. In the Pacific Northwest, several states have categorized it as some level of noxious weed. Too, the USDA qualifies it as an “introduced, invasive and noxious plant.”

So, how do we eradicate it?

To begin, just don’t buy it.

If you don’t have any English ivy, don’t buy any — even if you only intend to add it to a container planting. This stuff can and will escape. There are plenty of other evergreen options to consider — for your landscape or your containers. And, if you notice it for a sale in a nursery, try reminding the managers that this is a nasty plant.

If you’re just beginning to see little Hederas raising their seedling heads in your garden (courtesy of some pooping bird), pull and dispose of them right away. Seedlings are the easiest to eradicate! 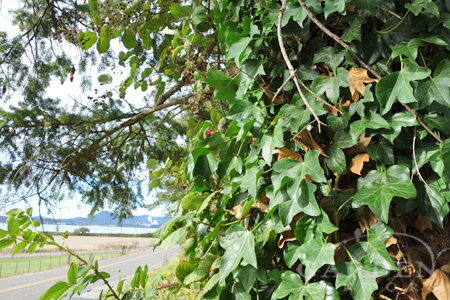 English ivy can quickly climb a tree by creating a “helix” of twining roots that have self-adhering attachments to bark. Remove ivy like this!

If you’re faced ivy climbing your favorite tree or forest, removal may take a bit longer. When ivy climbs trees (or anything else) it affixes roots to the bark. It does not sap energy from its host via these roots, but it can eventually add dangerous top weight, shade out leaves and even strangle a tree’s nutrient and transport systems. So, it can kill a tree.

Begin by cutting the ivy stems at the base of the tree. Then remove the portions of the plant that are rooted into the ground. This may take a lot of digging and pulling. Or, hire some goats, which will eat ivy!

After cutting the ivy stems at the base of the tree, leave the ivy that has climbed the tree intact; remember, those roots aren’t tapping into the tree. But, if you pull the fresh ivy from the bark, you may significantly damage the tree. By leaving the stems to wither and fully die on the tree, you’ll be doing your plant (and your hands and back a favor.) Once those climbing ivy helixes turn brown, remove them from the tree. And, yes, this may mean you do a lot of cutting at the base of a tree one season and waiting weeks or even months before you start pulling the dead stuff out of the canopy. 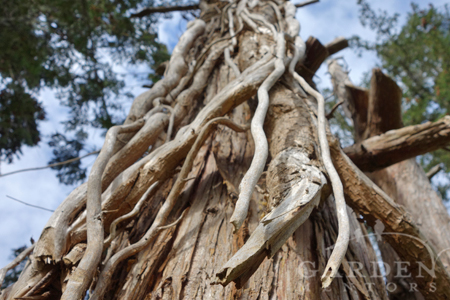 The woody roots entwining this near-dead native tree are English ivy stems that were cut too late. The top of the tree snapped off, possibly as a result of the ivy weight. A small portion of the tree still lives, but it continues to die. The good thing: wild birds are foraging & nesting in the slowly decaying trunk.

If you have ivy in a rockery, eradication is going to be difficult unless you’re willing to completely remove your rockery, dig out all of the ivy and then rebuild your rockery. In situations like this, cutting the ivy to the ground and then being vigilant about keeping every green sprout cut for months (or even years) will eventually kill the ivy. When a plant has no green top growth, which is how it feeds itself, it will eventually starve to death. Goats can be a huge help in situations like this.

If your garden is completely over-run with ivy, start by removing it in areas you use the most. Ivy creates a happy habitat for mosquitos and rats, so keep it away from your home first. 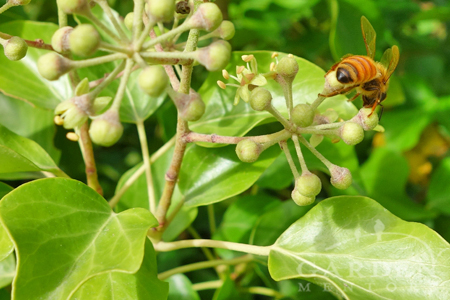 Some gardeners choose to make the most of an ivy-filled garden situation by clipping it into topiary or hedges to tame and incorporate it into the garden when complete removal seems all but impossible. Just remember that English ivy will eventually mature, bloom and form fruits that birds will spread far and wide. So if you choose to work with an ivy infestation, be sure to prune it heavily just ahead of flowering in summer or right after the pollinators have done their job but before the fruit matures in autumn.