Yep, it’s that time for cool season annual weeds to pop up their tenacious little heads again. Among them — Shotweed. It loves our mild temps and gentle, if persistent, autumn rains. Despite being a weed, it can be quite lovely carpeting flower beds in a lovely brilliant spring green. But as lovely as it can be, it is still a weed. So, after introducing a client to it in her own garden earlier this week, I realized it was time to remind all of you gardening readers that this weed is a multi-season menace. As in February when I first posted this article, now’s yet another time to work on clearing it out of your beds. Read more in the original post that follows:

One of the many things I do as a garden coach is teach individuals about the weeds in their gardens. Knowing what a weed is and how it grows helps us understand the best ways to deal with the plant. Today, I begin a garden weed blog series, Weeds in Seattle, with a tenacious little plant – Shotweed (Cardamine oligosperma). 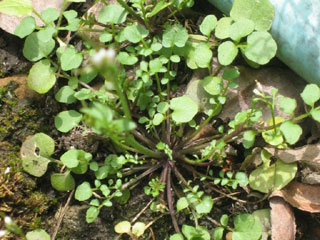 I decided to start with Shotweed because it is already showing up in tight little flowering clusters all over the greater Seattle area. It seems innocuous until it takes over the garden. I recall in years past telling a neighbor, “As far as weeds go, this one isn’t too horrible. See it has pretty little white flowers.”

Well, shame on me. Letting those pretty little white flowers form and go to seed just meant I was letting this weed get the best of my garden spaces. Sure, we all have to pick our battles in the garden, and we do what we can to stay on top of everything, but knowing that this is a fairly simple weed to remove means I’m going to encourage you to work at keeping it at bay. 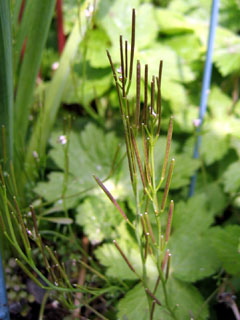 Shotweed goes by a variety of common names. Shotweed, spitweed, Pop-in-the-eye Weed, Wild cress, Western Bittercress, and Little Bittercress are just a few of the names you’ll hear. The “shot/spit/pop” names come from from poor souls who try to pull it as it has gone to seed. Once those seed pods ripen, the slightest breeze or touch will send tiny seeds flying all over the garden — and right into your eye. The “cress” terms come from those who harvest it as a food crop. Personally, I haven’t eaten it. However, Seattle Tilth’s Maritime Garden Guide (available here)  indicates that the stem tips and flowers are slightly peppery. The USDA site says its not palatable to humans.  Many other sources discuss it as a good addition to salads. Again, I haven’t eaten it. If you’re going to try it, be sure to properly identify your plant first and try only a very small amount to start and taste at your own risk. Just because one person can eat something doesn’t mean everyone can!

So, what if you just want to get rid of it? Well, you now know that the seeds fire off in all directions if the plant gets a chance to go to seed. So, ideally, you want to remove it from the garden before it sets seed. Unfortunately, for those of us not growing it as an edible crop, this can mean it appears in our cool-weather gardens multiple times a year. This plant likes cool weather. Seeds germinate even in winter, and start appearing in the garden throughout winter. Right now, I can see several of the tight little rosette forms of the plant in my own garden. And, some of them are even putting on flowers.  And this has been going on all winter, even though we’ve had cold and freezes. Fortunately, it takes slightly warmer weather for the flowers to transform into seed pods, so we can get out there now get it before this year’s seeds form.  Seed formation will be happening easily by March, if not sooner. 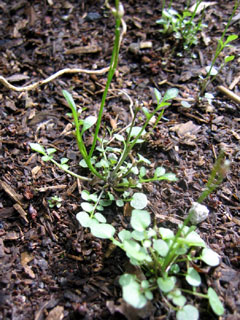 So, I’m starting to pull the shotweed plants  from the garden as I see them. As a self-seeding annual weed, these plants germinate from seed, form a plant that forms flowers and then seeds. When the seeds are spent, the original plant dies. (There are some perennial forms of Cardamine as well, fyi). And, the plant doesn’t form a deep taproot like you’ll find with Dandelions and Dockweeds, which I’ll cover later in this series. Instead, it is fairly shallow-rooted, with wide tiny roots that are easy to pull. It does have a slight taproot, but nothing difficult to remove. Plus, unlike the taproot weeds, if you don’t get all of the root from a shotweed plant, it isn’t likely to grow back (or multiply) from the roots.

It is important to dispose of the pulled plants and not just set them back on the soil. If you pull them and set them down, even root side up, these buggers often have the ability to reroot themselves. Probably this is because they grow in cool, moist weather that can give exposed roots a fighting chance even will removed from the ground.

So, if you get out there now, before the spring growth surge, and remove your shotweed, you’ll have a better chance of reducing its numbers. Keep in mind that this plant can germinate many times in our growing seasons. It only really stops when we hit the dry heat of summer — except that the dying plants will be spitting out new seeds that will germinate when the weather turns cool and moist again. And, of course, those seeds will come to life even sooner if they land in a shady spot that your irrigation reaches.

In Seattle, you’re likely to see plants in the garden starting in January – June and again September-November. Sometimes shotweed will appear in other months as well. The plants can range from the size of a penny to the size of a geranium depending on time of year and its growing environment. And, yes, regardless of size, every plant has the potential to form flowers and seeds!

It may sound like shotweed eradication is an impossible battle to win, but because shotweed is so easy to pull, it’s one weed that doesn’t require a lot of tools. You just need a sharp eye during your daily strolls through the garden and the willingness to pull a few weeds along the way. Of course, if you’ve decided at one time or other that it looks pretty and is no big deal, like I did foolishly years ago, you may need to go after it more seriously the first (and possibly second and third) time around.