Little white butterflies flitting among your cabbages? Kill’m dead or their babes will eat your crops!

Big, mature trees are going down hard this summer. Blame the drought last summer, blame a bunch of bugs, blame climate change or just get past the blame-game and start watering your stressed out big trees. 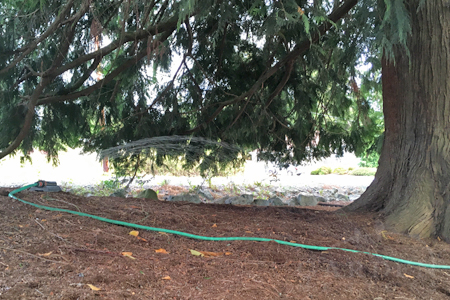 Slow, deep, repetitive watering under the cedars may help them through the summer. Just try not to soak the trunk of the tree while you’re at it.

For years horticulturists and arborists have been coming to terms with the idea that we’re going to eventually lose many of our native trees. One of the first we expect to go is our beautiful western red cedar or Thuja plicata. And, other natives will probably follow this beauty’s lead.

Recently, we hired New Leaf Arboriculture to help us with some of our biggest tree concerns, one of which was an enormous, multi-leader western red cedar. This gorgeous tree has lived through quite a bit of change, particularly in the last few decades. As recently as the 1980s it was one among many trees in an undeveloped forested wetland. Kids had a tree house in it during the 1960s and 1970s. Then, in the 1980s, much of land was cleared around it. And, eventually a large building was constructed adjacent to it. Then, because runoff had become an issue, much of the water that it (and its remaining neighbors) relied upon was rerouted into a county ditch. And, the ground above its uptake roots was carpeted in water-diverting beauty bark. It’s no wonder this tree was struggling! 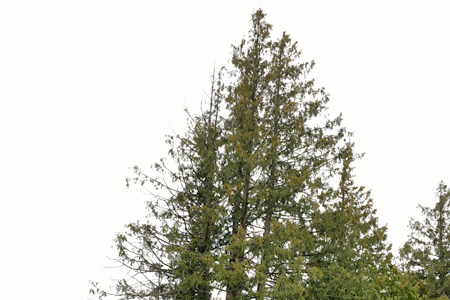 Sparse green growth on the tops of these cedars indicates stress.

Eric and Vance of New Leaf cleaned up much of the dead inside of this beauty and added safety cabling just in case it starts failing in wind or because of its many stresses. And, they reminded me:

“Get some water on this tree!”

So, the hose dragging has begun. It’s going to take a while to get a good amount of moisture to those feeder roots living inside a beauty bark prison, but by watering slowly and deeply and repetitively over the next several days, we hope to build a decent layer of moisture for this big beauty and two other western reds just up hill from it. It may take quite a bit of water, but frankly its worth the investment. And, once we build up a moisture layer, we’ll have to keep watering on occasion so that the feeder roots don’t dry out again during the long, hot, dry days that seem to be lasting later each year. 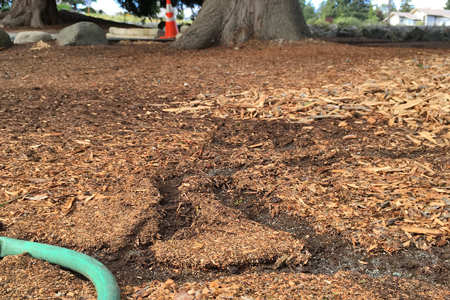 We hate beauty bark! It has a number of problems including not absorbing water well & causing runoff issues. (Eventually, we’ll get rid of what we can under these trees, but for now, we just need to water more slowly to break through this dusty root prison.)

Skip watering the dumb lawn. Let it go brown. But, don’t let the tips of those cedars brown out, indicating it’ll soon be a goner.

This time of year many conifers do go through shedding some older leaves, and they can look a bit more sparse because of it. But too much loss means worse things to come. As cones on these Thujas turn golden in summer, after being green in spring, the transition can add on to the stressed look. Plus, heavy cone set can indicate that the tree is really stressed out. Cones = seeds, and a tree putting out a lot of seeds may be trying to replicate itself that way as a last ditch survival effort. 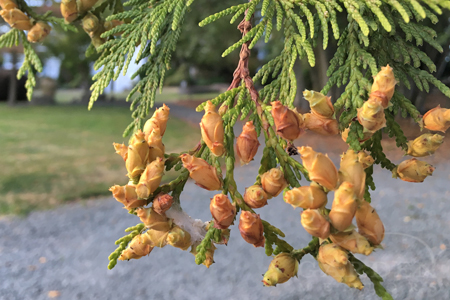 Heavy cone set like this on a Thuja plicata can indicate the tree is extra stressed out.

(Oh, and this doesn’t just apply to big, mature native trees. Rhododendrons, exotic trees, young plants and just about everything in the garden appreciates a good dose of water in August and September!)