Be sure to vent your seed trays once shoots emerge or disease may kill your new plants fast.

We’re available for virtual garden consulting in the time of Covid-19! 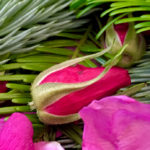 We have put together a number of offerings that bring us together in your garden while we all stay home to stay safe.

Why Not to Hire a Tree Trimmer Who Wears Spikes

Yesterday I met with a new client in Seattle. As I walked up to his home, I immediately noticed three Cherry trees in the front parking strip had been topped recently. However, it wasn’t until I was reviewing the back garden that I saw the worst of the tree trimming horrors his garden had sustained. Not only had he hired a crew that was willing to top his trees, but they climbed a cypress in his backyard wearing climbing spikes, which damaged the bark and cambium layer of the tree terribly. When I saw the spiked trunk, at first I thought someone had hit the base of the tree with a car because so much of the lower bark had been torn off. I was wrong; it was the tree workers who did it.

So, why was this dismaying?

First, the living part of the tree is directly below the protective bark layer. This “cambium” layer is where the plant transports nutrients up and down the stem; the bark protects this area. As well, plants don’t heal. So every spike insertion becomes a site for pest and disease. The ripped and torn bark and holes in the cambium and older interior layers will never heal.

Second, the cuts that were made to top the cherries and to “shape” the other trees were made at random points on the stems creating a “shape” to the tree. This may sound just fine. But it isn’t. When you understand that trees do not heal and when you learn that plants have specific points in their growth systems where they can protect themselves from the cuts we make, you better understand how and where to make pruning cuts. Clearly, these trimmers don’t know this. Or, worse, they do know and they just don’t care. Or even worse than that, maybe they do know what they’re doing and they hope that their sloppy work will stimulate new growth (through topping the cherries) and cause decline (through wearing spikes in the cypress) thereby creating more work calls from the client to them in years to come. 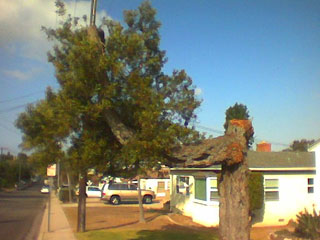 This Tree was Topped Twice!

When hiring a tree trimming service, be sure to find out what certifications the service holds. Ideally, hire an ISA-certified, licensed arborist. If the service offers to top your trees, that’s your signal to run away immediately. If they climb using anything other than ropes, saddles and ladders, don’t let them near your tree. Those spikes will cause damage from which your tree may never recover. Just think: you’d be paying to have your trees — your investment in plants — destroyed rather than cared for.

As this client learned the hard way, just because a service is cheap and immediately available doesn’t mean they’re good. In his situation, they sold him on price and convenience saying he’d save a lot if he let them do the work that day because they “had a truck in the neighborhood”.  In the long run, this kind of work saves a homeowner nothing and quite often costs them much more down the road.