Disease problems on your greenhouse plants? Try blowing it away by adding ventilation.

Where: at the Breazeale Interpretive Center in Bay View, WA
When: Every 2nd Saturday at 10am from March-October

What are these walks all about?
Robin will lead a series of informal walks through the upland forests & meadows of the Padilla Bay Reserve and Breazeale Interpretive Center. Together we will expand our understanding of the flora and fauna that inhabit and contribute to the delicate balance here where the land meets the Salish sea.

No need to RSVP. All ages welcome. Just meet us at the trailhead arch near the parking lot of the Breazeale Center for a fairly easy hike on the upland trail. Bring your curiosity! (Friendly, leashed dogs are welcome too.) 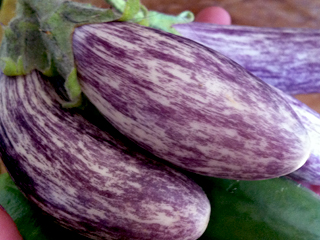 Here in the PacNW growing eggplants, peppers, tomatoes, and other nightshades successfully can be tricky. These crops thrive in hot climates, which we really don’t have. Instead, we enjoy relatively mild weather year-round, and summer doesn’t seem to really arrive until the middle of July (if it decides to really show up at all). So, with a shortened period of heat, getting these crops to cooperate isn’t always possible.

Over the years, I’ve managed to fine-tune our tomato growing techniques to produce even in the coolest summers. Details on tomato tricks here. Potatoes seem to perform pretty darn well so long as they aren’t planted and left to rot in really wet, cold soil. We aren’t a big pepper eating household, so not having those isn’t a big bother to me. That being said, I have found a jalapeno that produces fairly well for us — but that’s a post for another day. Today, it’s about the eggplants!

In years past, we’ve gotten some okay Globe eggplant harvests. We purchased plant starts and kept those plants going for most of the summer in pots, in the greenhouse. We got a few dwarfed “globes” that year, and until this year, we pretty much chose not to grow them. Instead, we looked forward to a few in our CSA box. 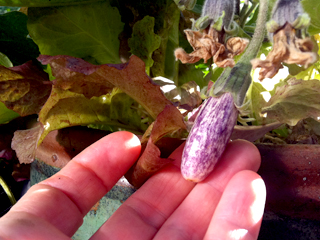 This year, however, I gave it another shot, and I think I’ve found the perfect variety for our cool seasons and small garden spaces. A local nursery was offering starts of ‘Fairy Tale’. This diminutive plant is perfect for container growing. It grows copious flowers and appears to pollinate readily. The cream and purple-striped, elongated fruits only get to about 3″-4″ long. They look like colorful earrings dangling from the plant, and there are a lot of them, which makes up for how small they are.

We have two plants growing and have harvested about six or so fruits already this summer. (Remember: our summer heat didn’t arrive until much later than when others got theirs). And, the plants are laden with several more yet to mature. And, yes, the pretty little purple flowers keep right on blooming.

No. The plants aren’t in the greenhouse. They’re outside and have been since about mid-June. One plant is growing in a simple 1-gallon size nursery container. The other is planted in a slightly larger ceramic pot. Both work great!

So, if you’re short on room or short on summer, consider pretty little ‘Fairy Tale’ eggplants and odds are you’ll enjoy a bountiful harvest no matter what Mother Nature may bring.