Got big trees? Minimize root distruption while planting or building to keep them healthy. 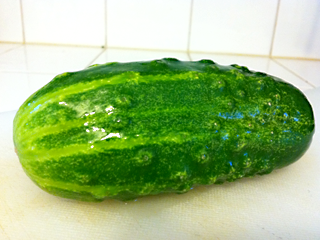 I’ve got to take a moment to sing the praises of my new favorite container cucumber – Spacemaster 80. Kinda sounds like the spaceship of cucumbers, right?

When I saw that Irish Eyes Garden seeds had a new compact, organic offering — Spacemaster 80 —  I couldn’t resist giving it a try. Purported to produce bitter-free, prolific fruits on determinant plants in 58 days even when planted in containers or in small spaces– I had to try it.

Because we have a cool, wet, short growing season, I decided to grow my cukes in our passive solar greenhouse, in containers this year. I seeded both SpaceMaster and Marketmore, which I’ve grown for several years with consistent results. Both germinated, and both took over the greenhouse, which is dripping with cukes right now. 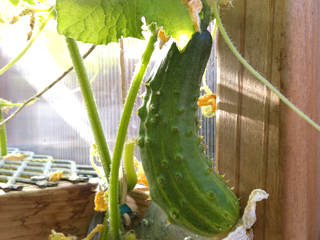 SpaceMaster Vine & Cuke Dripping Down the Sides of the Greenhouse

But, I gotta say: SpaceMaster is sweeter than Marketmore, and the cukes are so pretty. They look like perfect little slightly striped dill pickles. If I had a larger crop, I’d probably try my hand at pickling a batch.

The cons: Powdery mildew hits them fast and hard. But, with vigilant cutting out of the infection; the plants will continue to produce for several weeks despite being determinants.

Next year I’ll definitely try these again. They taste better than Marketmore, which also grow well in containers in the greenhouse. And, yes, I’ll probably grow more Marketmores as well. They’re my old reliables, and it looks like their more disease-resistant, indeterminant vines are going to outlast the SpaceMasters, which are coming to the end of their life cycle.