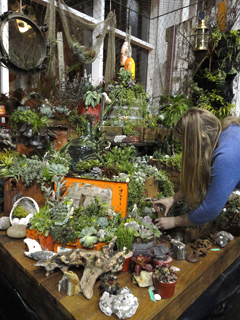 The Seattle garden world was in a whirlwind last week — or at least I felt like I was caught in a mesmerizing horty tornado! That’s what happens when you’ve got an all access pass to the Northwest Flower & Garden Show on a year like this one. Now that I’m coming out of my hazy show-over, its kind of amazing me to realize everything that happened during those brief few days. Whew!

Before the show began, I was on site working with my talented client Mari of The Lusher Life Project. Mari decided to try her chops at the show by putting together an award-winning container display garden. Yep, first try she took one of the three awards given in the container display category. And it was kind of a no-brainer for a recycling & repurposing maniac like Mari to win the award for Best Re-characterization.

During set up as I helped The Lusher Life Project team, I was thrilled to make connections with old and new friends on the show floor. Mari’s display was sandwiched between two great gardens. To the north, was a tropical delight co-designed by my friends miniature enthusiast friend Janit and container-brilliant Christina. To the south, Mari was flanked by delightful DIG. What I found most thrilling about being in this small space was not just the opportunity to soak up their talent but the cooperation that everyone put into building these gardens. Their team work brought to mind a made up term I first heard when working in high tech years ago — Coopertition. 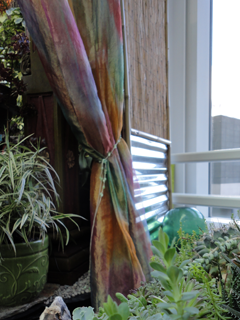 In high tech I never really believed the idea of Coopertition. There was a heckuva lot less cooperation and a heckuva lot more competition. In the hort world, this term really does have substantial roots, which were beautifully illustrated among this group of talented designers. Yes, they had all worked for months to imagine, design and cultivate the displays they were rapidly constructing for the show. But all of them took the time to help one another hold ladders, tweak designs, and protect tender plant materials. Their ultimate, unselfish goal — to ensure the garden show itself was stunning. As Christina told me during the show, “(the gardening world) is a very small community; the more friends you make, the more we can help each other. Our neighbors helped us by just being willing to share opinions; this was huge! It shows the typical, generous horticultural spirit — sharing wisdom and feeling good.”

And, Christina’s absolutely correct. When considering an open space in her garden, next to Mari’s, she decided to add a large glass fishing float to add cohesion and flow between the two gardens. When she and Janit were fine-tuning their statue of Buddha, Mari’s brother Lance took the time to share his well-traveled knowledge of Buddha to help them honor the god properly. 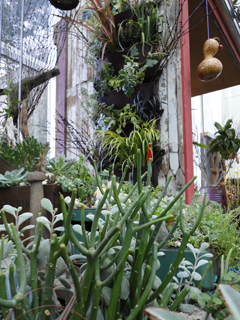 As I watched the DIG Nursery garden framework being built, I was absolutely thrilled to see that their design repeated the weathered, recycled elements so prominent in Mari’s garden. Their wall near Mari’s garden was a beautiful piece that could easily been interpreted as a fishing shack on the dock of Mari’s seashore display. Sylvia of DIG shared how she loves how the show is “a shared experience less than a competition. Each winner gives me new insight; you are building on each other. (Our south adjoining neighbor) Ravenna Gardens are total pro’s; I learn from them. Competition is good; it pushes you.” Not only did Sylvia get inspiration from her neighboring designers, but she also benefited from the customers Mari was able to send to her retail location during the show — DIG happened to be selling wire baskets similar to ones Mari had prominently displayed in her garden.

Okay, so that’s my report on getting ready for the show with others as a volunteer. I haven’t even gotten to the show itself — preparing for my seminars, hosting multiple visits from Growing a Greener World TV in my garden (as it snowed), attending tweetups, the gala and GWA meetings, shopping with young gardeners (and for myself), talking honeybees to the show audience with Corky of Ballard Bee Company, teaching kids the joys of vermicomposting, writing for the garden show blog, and all the other fun things that happened all in just a few, short, action-packed days!

There’s a Part II to this story that will have to wait for another day. Right now, the sun’s out & I’ve got gardens to design!