Plant peonies behind sturdy shrubs to give them something to lean on.

April showers interspersed with soil-warming blasts of spring sunshine create an ideal environment for the rise of the living dead — that ever despised perennial weed known to some as Morning Glory, Bindweed to others, and The Bitch in our garden.

And, yeah, The Bitch is back. 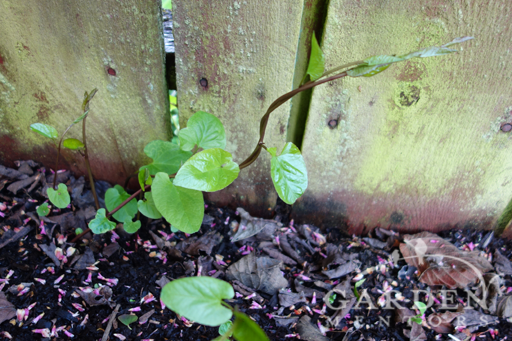 Bindweed aka Morning Glory growing along the fence line

This perennial, fast-spreading, vine weed is a tough one to eradicate. In our own garden, we do battle with it every year. And, in all honesty, I’ll say that in years past we even tried using any number of chemical methods of attack on it. Neither careful chemical techniques nor diligent mechanical methods have completely eradicated it. Several years ago we stopped the chemical attacks; they weren’t working, and that stuff is nasty, so why bother?

There’s all of one beneficial insect we’ve found that actually eats this stuff, but they aren’t big eaters. And, we’ve only sighted this bug in one garden one time, so there’s little likelihood we’ll see this weed devoured by the animal kingdom anytime soon. 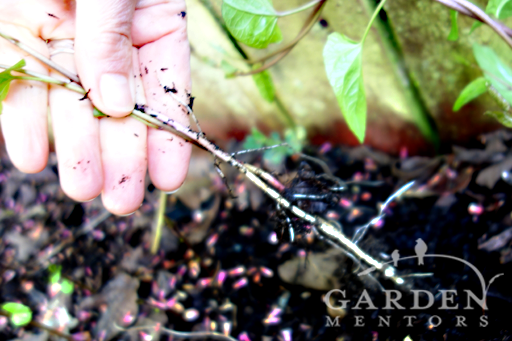 Remove all of the vine-like roots that travel horizontally under the soil.

Bindweed is an herbaceous, perennial grower. This means its top growth dies back for winter after sending all of the nutrients from the top into the roots in fall. During dormancy its roots stay fat, strong and growing. Then, right around the beginning of spring, it begins to send shoots up from the Earth. And, those shoots grow upward fast. They seek out anything nearby that they can then strangle with their twining stems. Plus, as those stems reach and strangle and photosynthesize in sunlight, the roots become even stronger. And the roots continue to travel underground, sending up additional top growth shoots as they grow, taking over a garden bed fast.

Ideally, get out all of the roots. Even a tiny bit of root left behind will sprout anew almost instantaneously. Check out how the vine-like root looks in the photo above. It puts on length then a few hairy “hold on” roots then more length and repeat to infinity. So, if you see a shoot coming up, don’t just rip the top off. Instead, dig down and find the source root and continue to follow it in the soil to pull all of it out — or at least as much as you can. In our own garden this weed lives along the fence with our south-side renter neighbors who never do anything about it. So, the weed powers up its photosynthesizing top growth in the sun on their side of the fence while its roots flourish in the rich soil on our side. So, we pull and pull, but because it has wrapped around this constructed property line, we can never just pull it all and be done with it. 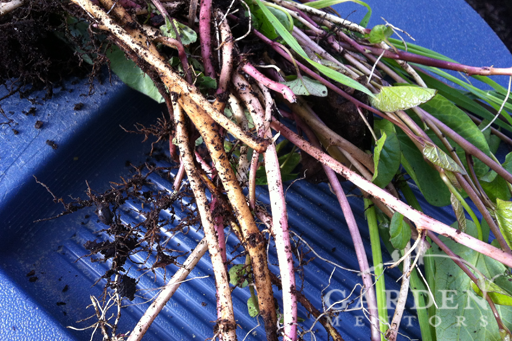 Don’t leave any Bindweed roots you pull in the garden or in your home compost!

And, sadly, any bit of root you leave behind — even less than an inch of it — will eventually regrow. So, watch your garden beds carefully throughout the growing season, and put the smackdown on this bitch every time she raises her evil head. In the blink of an eye, she’ll engulf your favorite hydrangea or ribes or anything else. Once that happens, take care unwinding each bit of vine and again rooting out as much root as possible. If her roots mix in with your perennials, think long and hard before you divide and move that perennial ’cause you’ll probably be moving this crap with it.

And definitely don’t let this one bloom. Sure, it may seem like those cup-like, whitish-pinkish flowers are kind of pretty and make up for how crappy this plant is. But, if flowers happen, seeds follow. And what comes from that seed? Why another weed of course.

If you haven’t checked your known bindweed/morning glory patch yet, get out there soon. The Bitch was almost a foot tall when we saw her periscoping top growth two days ago. Now, that growth and much root material is in our yardwaste bin. Never, ever put her in your home compost or she’ll take over that as well.