Salting icy decks & walks can make travelling safe, but too much salt can damage plants & soil

Setting out to profile something as big as the Mahonia genus in a single blog post is pretty much impossible. But, by focusing on its virtues rather than bemoaning its various prickly traits, we can probably convince you to fall in love with this often despised plant.

Oh, and yes, there is at least one Mahonia that won’t poke you, but we’ll get to that a little later… 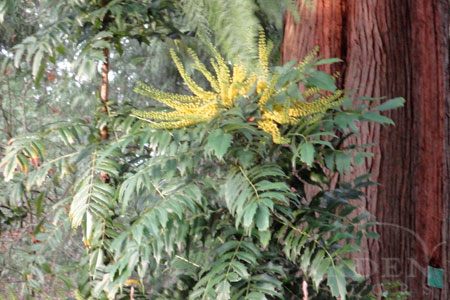 Mahonia ‘Charity’ and ‘Arthur Menzies’ grow quite tall, which is great for hummingbirds seeking their tasty yellow blooms in December & January. This beauty pops even more against the red trunk of a conifer in the Washington Park Arboretum Winter Garden.

To begin, a bit about the genus’ greatness:

Now, let’s look at some eye-candy at different times of year and on different varieties of the genus: 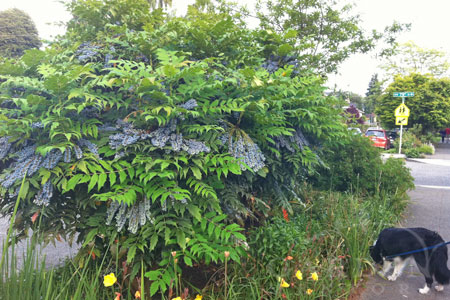 In a mass planting, this tall Mahonia (likely ‘Charity’ or ‘Arthur Menzies’) has provided a buffer from the street as well as habitat and forage for wildlife. 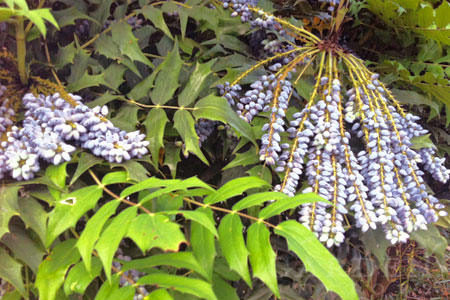 How about a close-up of the dripping clusters on that mass planting? Gorgeousness! 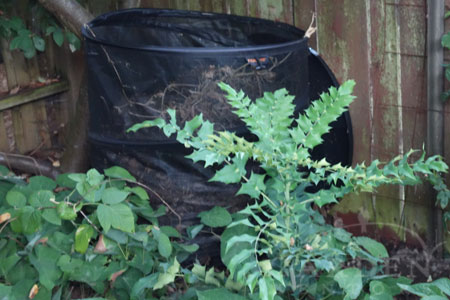 Young ‘Arthur Menzies’ Mahonia will hide the compost bin & offer blooms in the dead of winter. Just be patient, creating a thicket of tall Mahonia can take a few seasons. 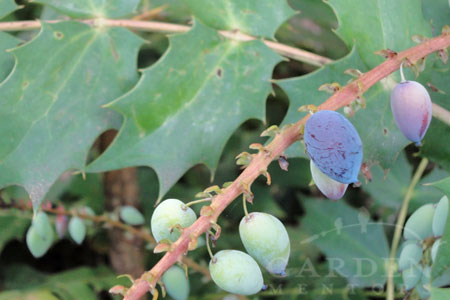 How about something not so big? Mahonia nervosa is a great choice for spaces that need evergreen interest at ground level. Expect yellow blooms in early spring followed by purple berries like these. And unlike Mahonia aquifolium and Mahonia repens (not show), they don’t spread quite as aggressively. 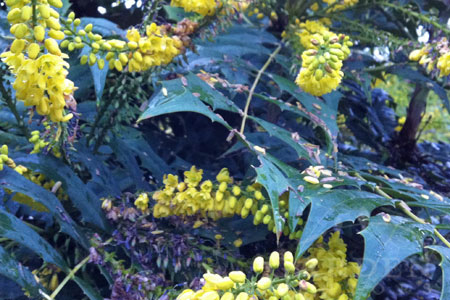 In January, the bright blooms on many Mahonia pop against the green foliage. Later, spring & summer flowering perennials will pop against green backdrops of this plant, even as its fruits form and evolve from green-white to deep black-purple.

So if you think Mahonia still means plain ole green, spiny foliage with bursts of yellow blooms in winter, get ready to think again. Even though they are Berberis (read: Barberry), there’s more than one surprise coming… 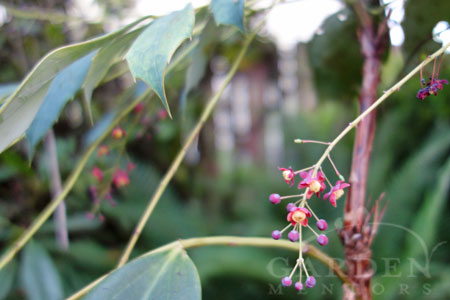 Mahonia gracilipes has a stunning reddish and yellow bloom from late spring through early autumn, plus the under sides of this beauty’s leaves are beautiful white. Surprise! (We have yet to see this one fruit, and if it does fruit, we cannot guarantee that its fruits are edible.) 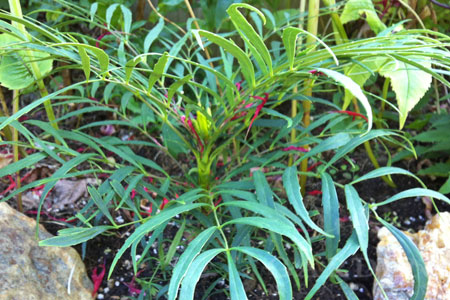 Mahonia ‘Soft Caress’ is a new cultivar known for its lack of spines. Ours bloomed yellow in summer, but this is known to bloom in spring. Maybe we’ll get both on this newbie!

If you’re ready to add Mahonia to your garden, get in touch for ordering information today.