Rhododendron leaves curling up in the cold? Don’t worry. This is how they protect themselves in a freeze!

A Garden for a Hummingbird Nest

In April 2015 I came upon an Anna’s hummingbird building her nest in our garden. I nearly ran right into Anna working as I was pulling weeds underneath the rhodie where she was building her birdie cradle. After she fussed at me, I backed away and left her to do her work. Fortunately, she wasn’t frightened and chose to raise her brood just outside our front door. I’m out in the garden so much, she had to expect I’d be out there puttering as much as she was. In this post and perhaps the next, I’ll share a few snapshots of her work and her babies. 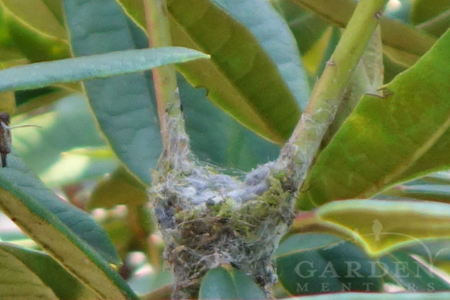 On April 5, 2015 Anna had begun building her tiny nest made of readily available spider webs, moss, lichen & other goodies from our garden. 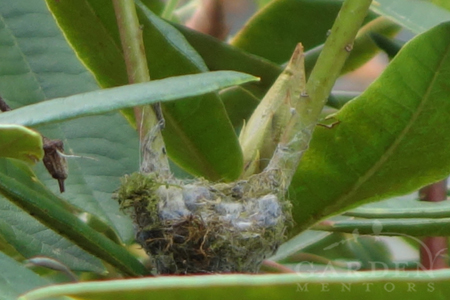 On her second day of building, Anna’s nest begins to take on a distinctive cup shape. 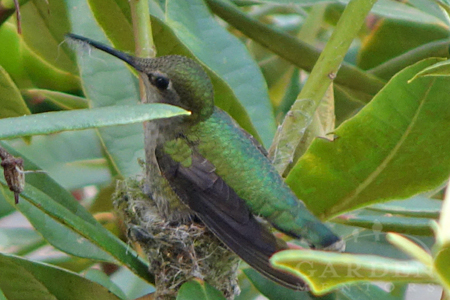 On day two, at the beginning of April, Anna adds a bit of spider’s web to her nest.

If you haven’t noticed yet, Anna’s green back looks almost exactly like the rhodie leaves surrounding her — in shape and in color. She picked a perfect camouflage location. Too, she positioned her nest in a crotch of the shrub over which leaves overlapped in such a way that rain never seemed to drip on her. It almost rolled from leaf to leaf to ground like and old-time cartoon sequence. 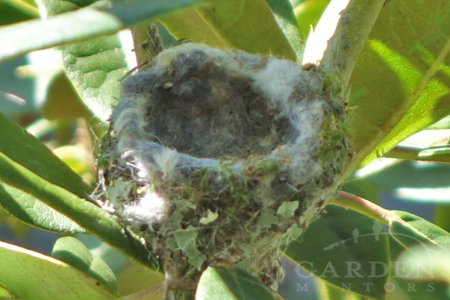 By day four of building, Anna’s nest was ready for egg laying. During her nesting time, Anna never stopped adding to her nest’s decor. 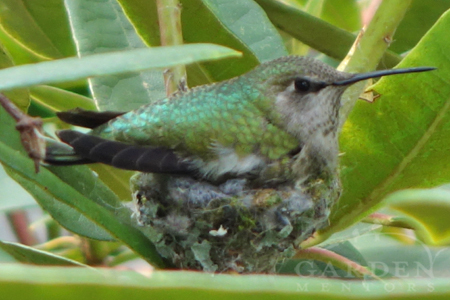 On Day five, Anna took quite a long break to sit in her nest. Hummingbirds rarely seem to stop moving, but during egg laying & incubation time Anna rarely left her nest.

You’ll notice I don’t give daddy bird much credit. That’s because once momma bird is knocked up, the burden of building the nest, sitting on the nest and raising the babes is up to her. He may be around, defending his feeding territory, which he will share with her, but that’s about it. But more about their relationship later including his reappearance once the babes fledge. 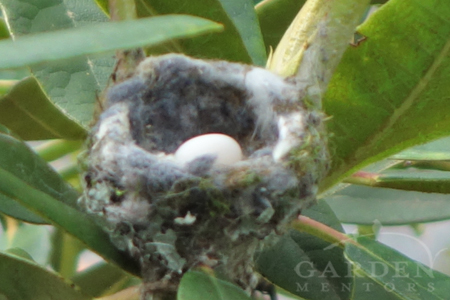 Although she rarely left her nest, I did manage to catch a glimpse of her first egg five days into watching her. 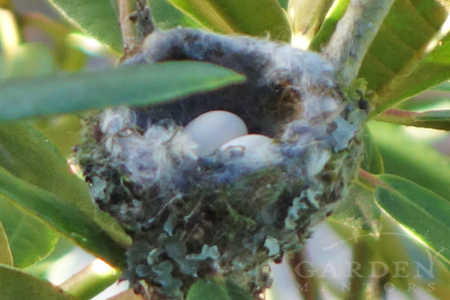 Two days after the first egg was laid, a second one was visible in the nest.

Her one error: (Or at least it seemed like an error to me) Take a look at the images. Notice that one leaf begins to dip closer and closer to the nest. As rhodie buds swell before opening, nearby older leaves begin to change position too. Eventually, she was barely able to sit in her nest because the leaf had inserted itself just under the spot for her butt. I resisted the urge to trim anything from the rhodie in order to see her nest more clearly. However, when I realized she wasn’t able to warm her eggs properly because of this leaf, I snipped it away, without touching a thing, during one of her very brief foraging forays. After, she snuggled right down on those eggs once again. 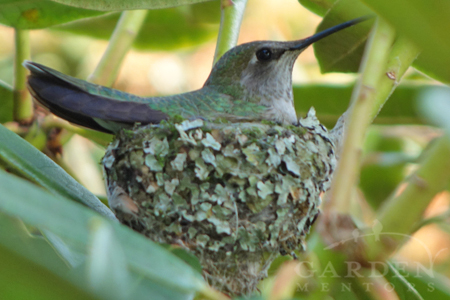 And then the waiting begins…
Here Anna sits patiently on her eggs 10 days after laying both of them – rain or shine.

Part two is live now, but before you go….

Get outside and prune your rhodies; her nest happens to be in the rhodie we used to illustrate our post on how and when to properly prune and deadhead a rhododendron.

Then, check out the next part of the story of Anna and her hummingbird nest in our garden.

And, watch your garden closely this spring. Listen for the whistles and chirps of birds. If you have the right habitat, hummingbirds may be nesting in your shrubs right now. In fact, I watched another nesting Anna mother gathering spider’s webs from our eaves yesterday. Perhaps a new nest will appear in our garden soon. How about in yours?